A Time to Speak Out 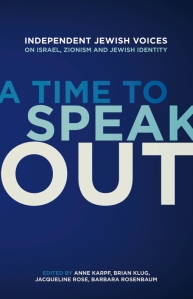 A Time to Speak Out: Independent Jewish Voices on Israel, Zionism and Jewish Identity

Jewish voices challenge the terms of the Israel/Palestine debate.

In A Time to Speak Out, a collection of strong Jewish voices come together to explore some of the most challenging issues facing diaspora Jews. With articles on such topics as international law, the Holocaust, varieties of Zionism, self-hatred, the multiplicity of Jewish identities, and human rights, these essays provide powerful evidence of the vitality of independent Jewish opinion as well as demonstrating that criticism of Israel has a crucial role to play in the continuing history of a Jewish concern for social justice. At once sober and radical, A Time To Speak Out reclaims an often intemperate debate for those both inside and outside Israel who prefer to confront uncomfortable truths.

“Many of the essays demonstrate a meaningful intellectual engagement with issues of Jewish identity, which goes beyond the politics of Israel-Palestine.”
Bernard Gowers, Jewish Quarterly (Winter 2008, Number 212)

“There is, despite the the consistent reiteration of Israel’s well-documented transgressions against the Palestinians, an uncharacteristic air of fairness to the volume, one which attests to the impact the original pieces published by IJV members in Comment is Free first had. It does not provide excuses, so much as it rightfully renders what a complex picture diaspora Jewry’s relationship with Israel actually is. Though the authors are critical and espouse unambiguous positions, for the most part they present their arguments in such a way as to transcend the tiresome didactics and cliched moralisms typical of much progressive writing on Israel. If what the editors wanted was to help promote real dialogue within the Jewish community and reach out to the unconverted, this will undoubtedly help facilitate it.”
Joel Schalit, Comment is Free, The Guardian (18/11/08)

“A Time to Speak Out”, is available in bookshops or you may order a copy through direct order from IJV at a discount:

If you order more than one book, extra copies will be just £6.50 each.

To purchase your copy of “A Time to Speak Out” through IJV, please fill out the order request form below. Following our receipt of your order request, you will receive a confirmation email with payment details.